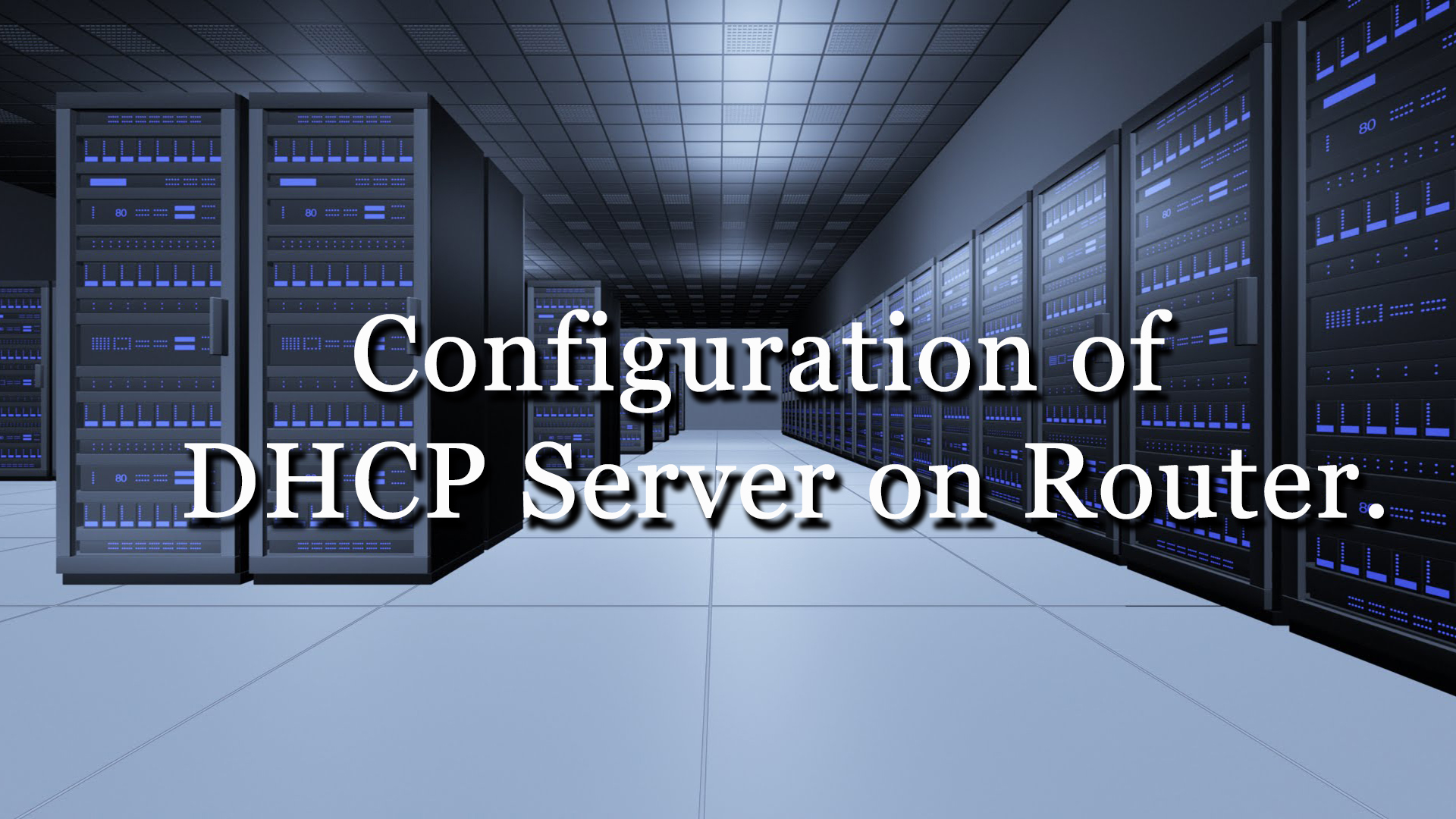 We love technologies that make our work easy ,one such technologies is DHCP when the network gets bigger and your network admin becomes unreachable to every device on the network he calls one of his friend in deed yes you guessed it right it’s his friend DHCP. Well someone’s friend can be your friend but you have to know him first or you just have to know how useful he can be to you in tough situations or if just want a Cisco Certification .Ok I guess much of going in circles let’s get to the point following lines are dedicated to DHCP working in the network it will help you in Cisco CCNA Training.

easier administration and works well in small to very large network environments. Many

types of hardware can be used as a DHCP server, including a Cisco router.

hardware address must be entered manually in a BootP table. You can think of DHCP as

a dynamic BootP. But remember that BootP is also used to send an operating system that

a host can boot from. DHCP can’t do that.

is requesting an IP address from the DHCP server. Networking Certification in Delhi is quite helpful to secure your job in IT field, you know fundamentals are never going to change. Here’s a list of the most common types

of information a DHCP server can provide:

out a broadcast at both layer 2 and layer 3.

DHCP is connectionless, which means it uses User Datagram Protocol (UDP) at the

Transport layer, also known as the Host-to-Host layer, which we’ll talk about later.

Seeing is believing, so here’s an example of output from my analyzer showing the layer 2

The Data Link and Network layers are both sending out “all hands” broadcasts saying, 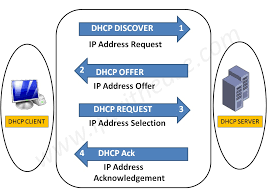 This is the four-step process a client takes to receive an IP address from a DHCP server:

DHCP Offer message back to the host.

A DHCP address conflict occurs when two hosts use the same IP address. This sounds bad,

and it is! We’ll never even have to discuss this problem once we get to the chapter on IPv6!

to test the availability of the address before it’s assigned from the pool. If no host replies, then

the DHCP server assumes that the IP address is not already allocated. This helps the server

know that it’s providing a good address, but what about the host? To provide extra protection

against that terrible IP conflict issue, the host can broadcast for its own address!

A host uses something called a gratuitous ARP to help avoid a possible duplicate address.

assigned address to solve conflicts before they occur.

So, if an IP address conflict is detected, the address is removed from the DHCP pool

(scope), and it’s really important to remember that the address will not be assigned to a

host until the administrator resolves the conflict by hand!

Guys now you how what DHCP server is and how it works in the network there are other various fun protocols that can help you achieve what you want Networking Training in Delhi is definitely going to help you in long run.

Okay, so what happens if you have a few hosts connected together with a switch or hub

and you don’t have a DHCP server? You can add IP information by hand, known as static

But when you’re in your corporate network working and you have a DHCP server running,

and your host shows that it’s using this IP address range, it means that either your

some network issue. Believe me—I don’t know anyone who’s seen a host in this address

range and has been happy about it!

Now, let’s take a look at the Transport layer, or what the DoD calls the Host-to-Host

Configuration of DHCP server on router

To configure a DHCP server for your hosts, you need the following information at

Network and mask for each LAN Network ID, also called a scope. All addresses in a

subnet can be leased to hosts by default.

These addresses will not be handed out to hosts. I usually reserve the first address of

each subnet for the router, but you don’t have to do this.

Default router This is the router’s address for each LAN.

DNS address A list of DNS server addresses provided to hosts so they can resolve names.

Here are your configuration steps:

because as soon as you set a network ID, the DHCP service will start responding

time in days, hours, and minutes. 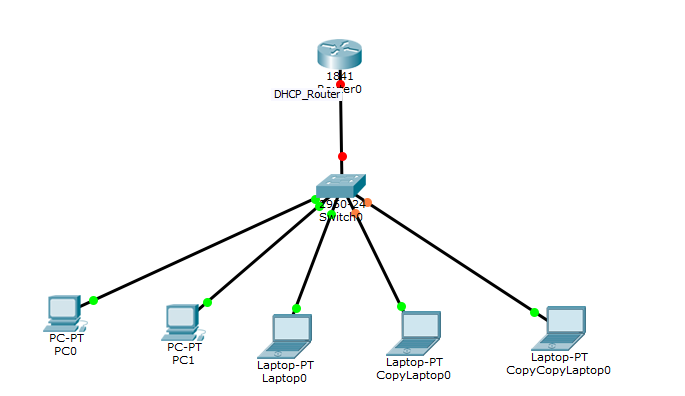 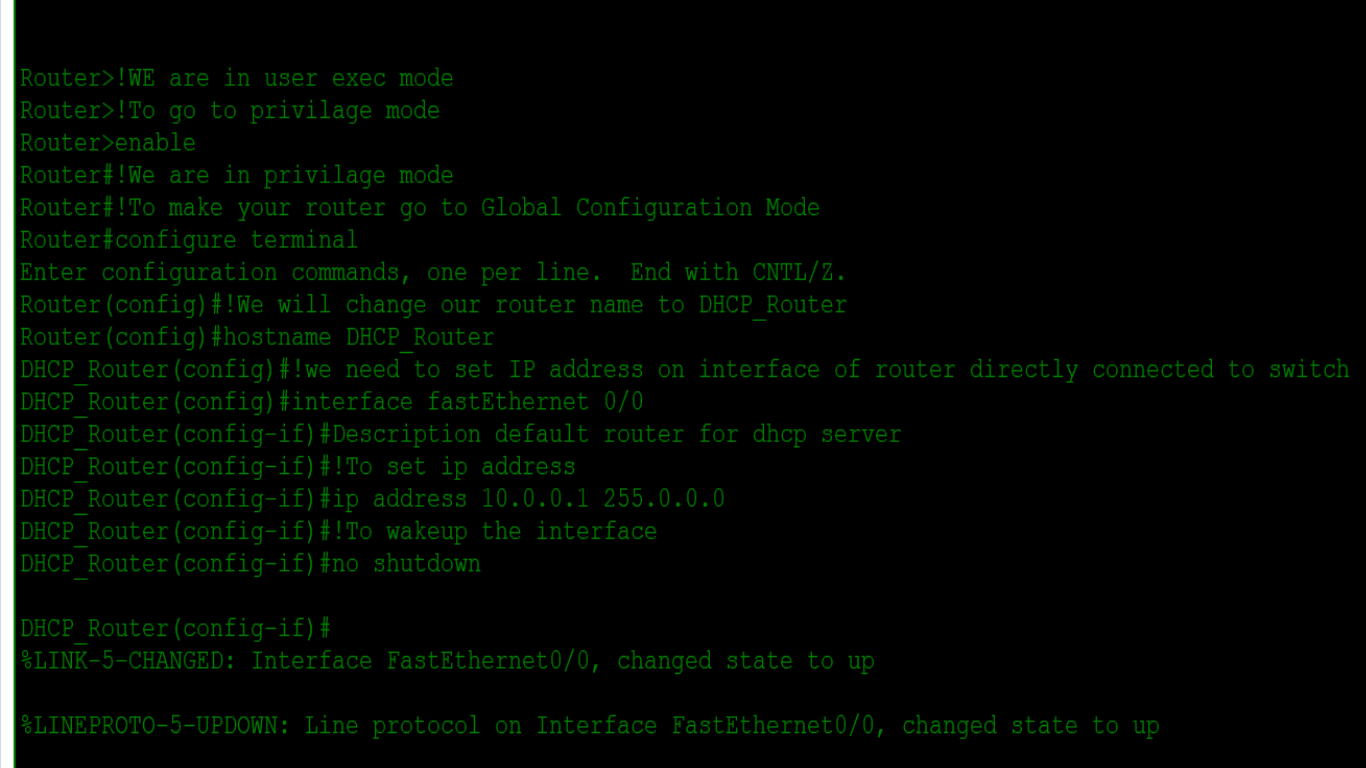 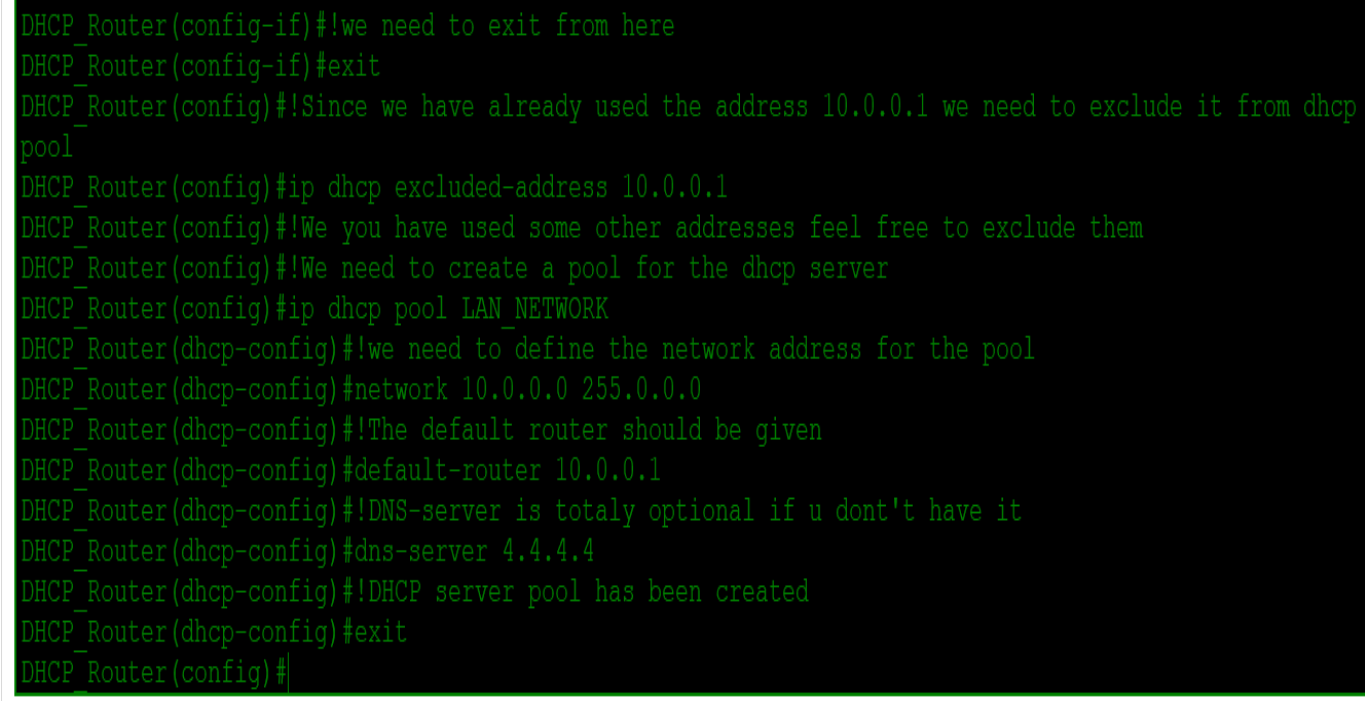 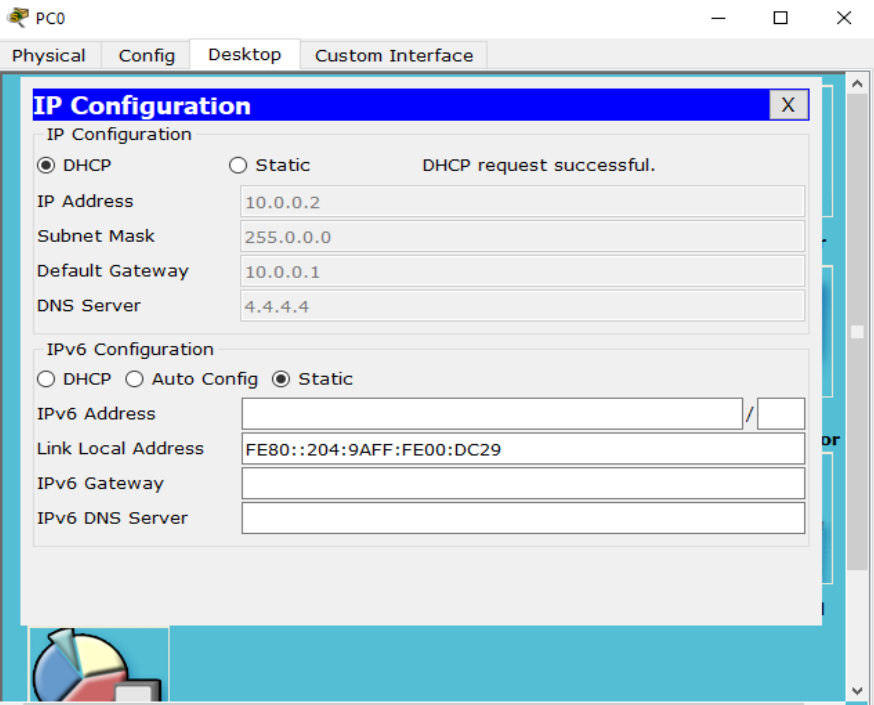 and verifying a DHCP service. You’ll get to see the output for these commands when

I build the network in Chapter 8, “IP Routing,” and add DHCP to the two remote LANs. I

just want you to begin getting familiar with them, so here’s a list of four very important ones

and what they do: 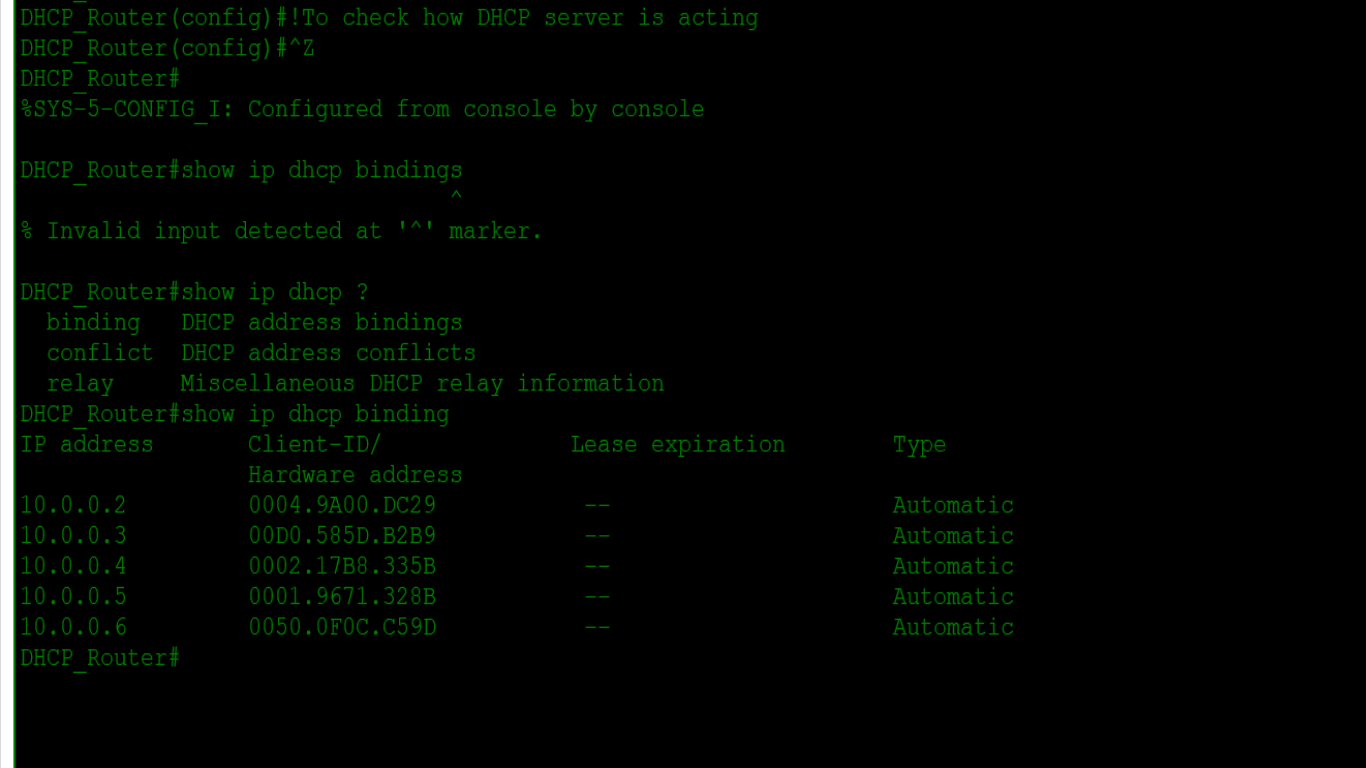 career in networking you should definitely do CCNA Training in Delhi and later even get CCNA Certification in Delhi.