To evaluate the behavioral aspect of EIGRP peers by making them form neighbors, redistributing subnets and then by supplying duplicate router-id in the routers.

Enhanced Interior Gateway Protocol (EIGRP) is layer 3 protocol. It was initially CISCO proprietary, later it became a standard protocol. Its protocol number is 88. Its maximum hop count limit is 255 and its kept 100 by default. This is a very important topic of CCNA and CCNP which are very important networking training in current IT industry.

It is a classless routing protocol, supports VSLM and discontinuous networks by sending subnet mask information as part of a route advertisement. By default, summarization is enabled by default which can be removed by “no auto-summary command” in global configuration mode of “router EIGRP asn number” command
EIGRP is known to be an advance distance vector. It advertises routes and learns routes from the directly attached neighbors like a distance vector routing protocol (like RIP).It uses hello protocol to discover neighbors and forms neighbor relationships similar to a link-state routing protocol (like OSPF). Like link-state protocol, it only sent partial updates when a change occurs and not periodic updates. Hence it combines features of both distance vector and link state routing protocol hence it is called a hybrid protocol. 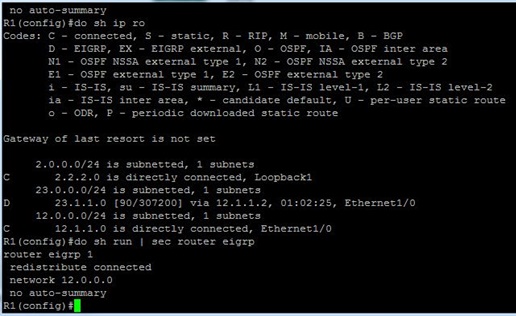 By configuring Loopback IP address 2.2.2.2/24, R1 takes it as router-id by default as can be seen below 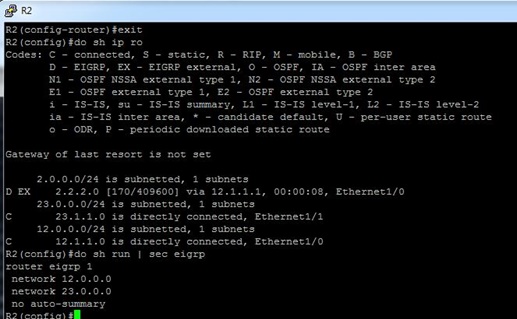 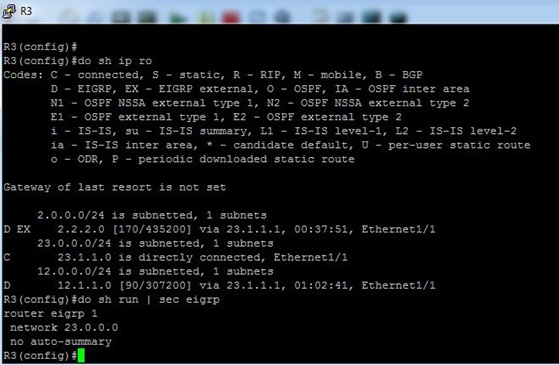 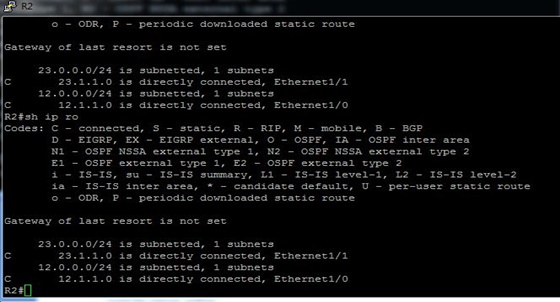 EIGRP router-id can be same for forming neighborships unless external redistribute routes are injected. For OSPF router’s id cant be same for two routers as the router-id uniquely defines router to all other routers in the network.